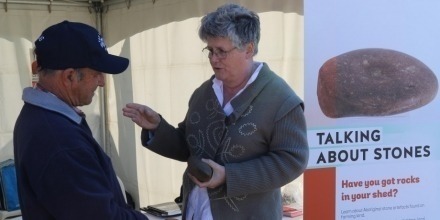 Dr Robyn Mckenzie speaks with a local farmer at a Talking About Stones event.

Researchers at The Australian National University (ANU) are encouraging farmers in in the Riverina district of NSW to discuss the difficult issue of what to do with Aboriginal stone tools they might have found on their farms.

Lead researcher Dr Robyn McKenzie said her team will be holding a series of 'Talking About Stones' events in the region which they hope will help resolve the frequent yet complex issue of Indigenous artefacts found on Australian farms.

The research team decided to hold the events after talking with regional museums about their collections of Indigenous artefacts and finding that most of them were donated by local farmers.

"It became evident most of those stone tools had been brought in by farmers who had found them whilst working," Dr McKenzie said.

"In fact we found finding these stone tools was so common that most farming families in the region had a stone tools stored away in an old shoe box or a milk create."

Dr McKenzie said because farmers were unsure of what might happen if they came forward after finding these artefacts, many of them had been donated anonymously, making it impossible to track their history.

"People just don't know what to do with them, they are nervous about it," she said.

"They know these artefacts are of significant cultural value, but due to complex legislation and misinformation, they are fearful of what might happen if they tell someone about them.

"They are not sure about Native Title, and they are scared that if they find important items they might have their land taken from them, which is not the case."

Dr McKenzie said the issue isn't helped by complicated legislation that differs from state to state.

"The NSW Aboriginal Heritage legislation, for example, states items should not be harmed or moved, but farmers often move them in order, as they see it, to protect them from harm."

The 'Talking About Stones' events aim to bring together farmers, Aboriginal communities and local museums to start a conversation about what would be the best outcome for these items.

The researchers are hoping to find farmers willing to discuss the issues.

A team of experts including Indigenous knowledge holders, archaeologists, historians and geologists will be on hand for this purpose.

The requirements of the National Parks and Wildlife ACT 1974 apply requiring notification of Aboriginal objects located.

It is important when Aboriginal objects are found that these are left in-situ, reported and protected. This would generally involve ceasing activity in the vicinity and advising the Office of Environment and Heritage.

Where activity or development is proposed in the vicinity of Aboriginal objects the landholder may seek an AHIP to conduct the activity: www.environment.ndw.gov.au/licences/ahipforms.htm

Assistance in these matters is available from the OEH Heritage Division.

Talking About Stones is part of an ARC Linkage grant funded project partnership between the ANU, the British Museum, the National Museum of Australia and the Museum of the Riverina.

You appear to be using Internet Explorer 7, or have compatibility view turned on. Your browser is not supported by ANU web styles.
» Learn how to fix this
» Ignore this warning in future